The Debate is On: 15 Million or 5.8 Million Love Me Again First Day Gross? 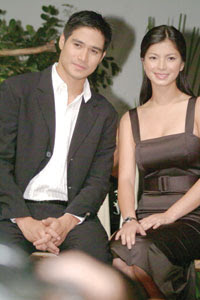 Fans are raving. The detractors are graving. This is the scenario as far as Love Me Again's first day gross is concerned. A local tabliod entertainment columnist, Allan Diones, claimed that the Piolo-Angel starrer raked in a mere Php 5.8 million nationwide on its first day. He said it was according to a very reliable source. The figure is printed in his column at Abante Tonite.

On the other side, there were unofficial reports that Piolo's movie with Angel grossed a big Php 15 million on its first day. While that number is quite high, it is not that unbelievable, considering the way the people flocked in to its premiere at SM Megamall. On its first day of showing, there were two theaters for Love Me Again in almost all SM Cinemas. Why? To accommodate the influx of movie goers all eager to watch Piolo and Angel on the big screen. I myself watched on the first day. I would say that the number of people is twice as much as I expected. The Php 5.8 million figure is way too low for what I have seen. They should have raised it to Php 8 million at least, to make it a little believable.

However, the people behind Star Cinema is mum about the movie's official box office sales on its first day. Today, Love Me Again marks its second week of showing. No figures from the producers are out yet. Is this a strategy? Or a marketing study? Remember that Star Cinema didn't release first day gross values of the Sarah-John Lloyd movie, A Very Special Love either. But it was the strongest last year, before Ai-Ai's MMFF entry, Ang Tanging Ina Nyong Lahat.

Bottomline? 5.8 million or 15 million, it really doesn't matter. The movie was watched and flocked by many Angel Locsin and Piolo Pascual fans. It wouldn't take away the fact that it was a good movie with great cinematography and superb acting. It's worth your money, especially if you're a fan. I'd watch it over again if I could.

Thanks for the visit! Please claim your Free Diet Pills HERE.
Posted by Reese at 6:24 PM

Sorry, got carried away with the dollar sign. Should have been in Php. Edited. Thanks for bringing it to my attention.

wow box office pla yan but like them both